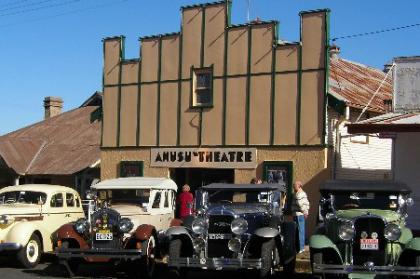 The art deco theatre in Manildra near Orange, Central West NSW, is a rare purpose built theatre that has been operated by the same family since it was built in 1936. Movie Theatre expert, Professor Ross Thorne, has described it as "a living icon of the importance of film and cinema in the course and pattern of NSW's cultural history".

There are only a handful of early theatres remaining in NSW and the AMUSU is an extremely rare example of of one that has operated continuously. Few, if any, cinemas possess the memorabilia and moveable heritage that is found at the AMUSU. Heritage advisor for the Cabonne area, Sue Jackson, describes the collection as a "rare treasure".  Allan Tom was the classic pictureshow man, travelling the district and screening in tents and halls.

She continues - "After WW1 Allan Tom (Tomsie to everyone) got his first truck and put a silent projector on the back. When talkies came in, he adapted the arc-lamp projector  to sound by synchnonizing the picture to a phongraph record. That projector is still there. Everything he bought or adapted is still there. It is an amazing record of the development of cinematography through the 20th century". Allan ran the theatre till his death at 93.  The name Amusu he got from a cinema in Syney of the same name

The Amusu  in Manildra is now operated by a dedicated committee, including Tomsie's   daughter Lyn Woodhart and  and head of operations, Joan Stevenson.  It still screens all the latest release films every third Saturda night of the month at 7.30pm. including a free supper after the movie and is available to coaches, social clubs, sporting clubs, schools etc."

In the building next to the threatre in what used to be Allan Tom's garage business, Joan Stevenson has set up an interesting museum of movie memorabilia. As well as projectors and such, there are thousands of film posters many of which are for sale at resonable prices

If you'd like to arrange a party, you can even choose the movie you'd like to see if you give them enough notice. Check with Joan at 63645906 for minumum numbers and dates.

And for more photos of the Amusu, the interior, go to our photo gallery. The Amusu does not yet have the latest digital projection due to cost. Any help you can give in that regard, I'm sure would be appreciated. You'd be helping a precious bit of cimea history.