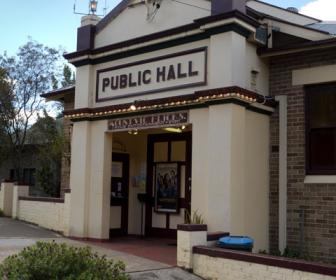 I dropped in on Mount Vic Flicks last night (Jan 22nd 2015) to see how they're going,  the screen having been re opened 15 months now.

Cinematouista is particularly interested in this cinema because the venue is now in the hands of the Cousins family,  Adam and Kirsten and their two small boys.

As far as we know,  it's the only boutique cinema in Australia being run by a young family, and as such,  it represents a vote of great confidence in charming single screens. As you know, we feature only singles and twin screens on this site. Well done, Cousins  and great to be told you've had an excellent year, 2014

Mount Vic flicks is  a silver screen which cinematourista strongly suggests you visit. The welcome is warm, the choc tops are great,  and the movies you'll see there are of the food for thought type, not popcorn flicks, though they run great films for kids in the hols.

Getting there by train is relatively easy in thwe day time  since the Mount Victoria  train, leaving  from Sydney Central or Stratfield,  virtually pulls up in the  cinema lobby, so close to the station it is. iI must be said, though. the trains are not that frequent.

Check out their web site for days and times. They run thursdays through sundays, and dont forget to tell Adam and Kirsten that your a cinema tourista.

Hopefully,  it wont be too long before you'll  have your cinema tourista passport . tht will be a handsome shiny silver Passport type book called, The Silver Screen Saver. Paticipating cinemas will have a rubber stamp showing their facade and with boxes in which you can fill in the date of your visit and the movie seen.

At some point,  you'll  be able to go around the world,  hopping from one charming retro cinema to another. Having tracked down (we think)  every boutique cinema in Australia, we've already begun to add some in the UK and the US.

There's  a lot of work ahead  for this not-for-profit site since we've just been told there are still a 1000 single screens in the US alone!

Back to the matter in hand. The owners  write. "Located in Mount Victoria in the Upper Blue Mountains and less than a half hour drive east of Lithgow, Mount Vic Flicks celebrated its 25th anniversary of quality entertainment in June 2012.

Specialising in a variety of intelligent cinema from Australia and around the world, we offer great value in a nostalgic single-screen venue. Unless advised otherwise in the programme we are generally open from Fridays to Sundays, and for seven days during the summer holidays."